About The Computer Keyboard keys information. The keyboard is used for entering data into the computer system. It can type words, numbers and symbols.

The keyboard and computer mouse are input devices. These are used for performing various functions. A computer keyboard has 104 keys. The keyboard has Letter keys, Number keys, Function keys, Arrow keys and Special keys. Let us learn about a few more keys on a keyboard. 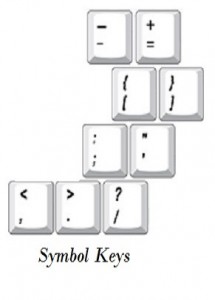 You can use these as Symbol keys by pressing the Shift key along with the Number key.

There are 12 functions keys from   F1 to F12 at the top the keyboard. Each Function key has a different job to perform.

Shift Key is used with the other keys for different purpose.

If you press and hold the shift key along with a Letter key, it will type that letter in capital even when the Caps Lock is turned off.

To type the upper symbol on you need to press and hold the Shift key along with the Symbol key.

You can press the tab key to move the cursor several spaces forward at once.

The short form of Escape key is ESC. It is placed at the top left corner in most of the keyboards. This key allows us to cancel an operation.

Keyboard: This is used to enter data into the computer system.

Escape key: It allows to cancel an operation.

Function key: Each of these key have a different job to perform.

Shift key: It is used with the other key for different purposes.

Symbol keys: These have special signs and symbols.

Tab key: It moves the cursor several spaces forward at once.