Introduction
Computer being a versatile machine can process different types of data. so to work with these data types we need different type of devices which can help us to enter such data types in the computer and to receive their outputs as well in this chapter we will cover many such devices like keyboard, mouse, joystick, light pen, printer, speaker, etc. That can be used with the computer. 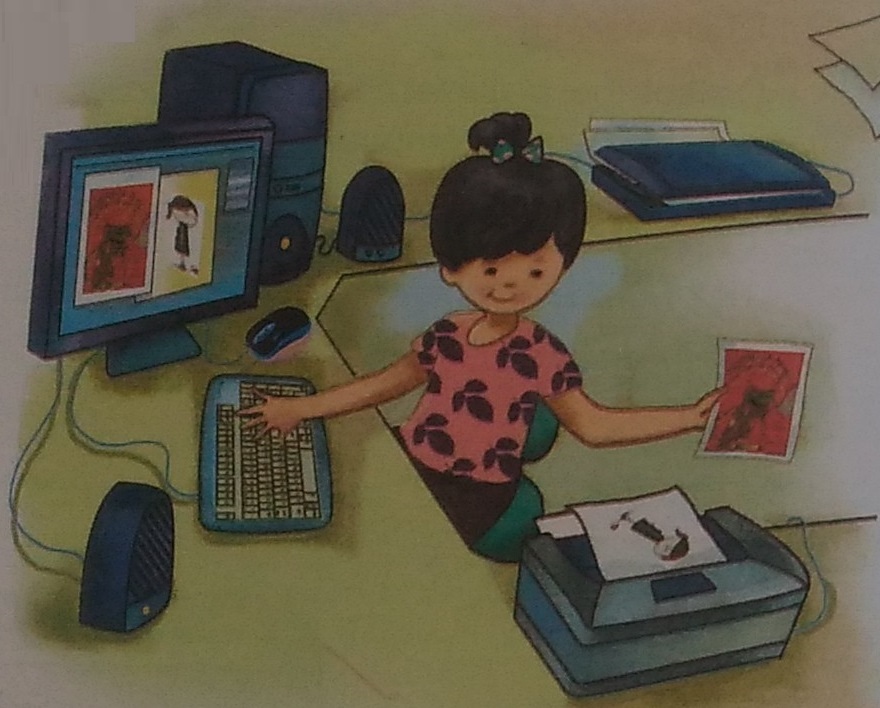 Children you know that computer is a data processing machine and it needs user’s instructions to perform any job. After processing the raw facts (called data), it produces useful information for the user. But how do you give data and instructions to the computer and how it can return the useful information to you.
To do all these, different types of input and output devices can be connected with the computer.

Input Devices
The devices which are used to give data and instructions to the computer are called Input Devices. Various types of input devices can be used with the computer depending upon the type of data you want to enter in the computer, e.g., keyboard, mouse, joystick, light pen, etc.

Think and Answer
Which of your sense organs work like input devices?

It is the most commonly used input device. It is used to enter data and instructions directly into the computer. There are 104 buttons on the keyboard which are called keys.

Did you Know?
The keyboard was invented 134 years ago by Christopher L. Sholes.

Mouse
Mouse is another input device which is commonly found connected with the computers. It is basically a pointing device which works on the principle of Point and Click. When the mouse is moved on the mouse pad, a light beam underneath reflect to give motion to the pointer on the screen.

The mouse is used in windows based programs, where the user can run the commands by pointing the objects with the help of pointer and clicking the buttons on the mouse. We also use mouse for drawing in paint and kid pix.

Most of the latest mouses, these days, include a wheel in the middle of two buttons that help us to scroll through documents more easily. we use our forefinger to move the wheel to scroll up or down in a document. Optical mouse uses red light to track the movement of mouse for moving the pointer on the computer screen. This type of mouse is more accurate and reliable than the traditional mouse.

Nowadays cordless mouse is very popular. it dose not have wires. it either uses Bluetooth technology to sends the data through the air to a receiver, usually plugged in USB port of the computer. 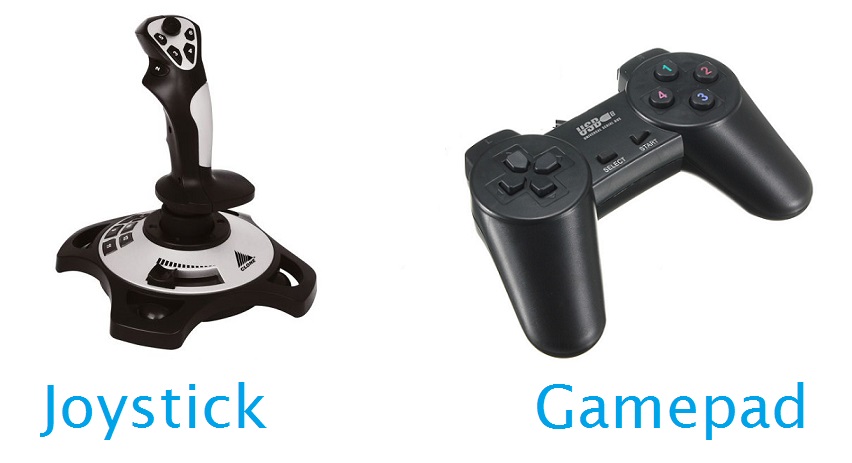 Joystick and game-pad are also input devices which are also input devices which are used to control the movement of object on the screen. Just like mouse, these are also pointing devices. Mostly they are used for playing games on the computer.
The joystick has a vertical stick with a track ball at its bottom. While playing the games on the computer, the user needs to move the objects quickly on the screen. With the movement of this vertical stick the objects can be moved in all the directions easily.

A game-pad is a type of game controller held in two hands, where the fingers (especially thumbs)are used to provide input by pressing buttons on it. It is also known as Control Pad.

Think and Answer
Have you seen joystick in any other machine?

Light Pen
Light pen is another pointing type input device. It is a pen shaped device which can be used by directly pointing the objects on the screen. It can also be used for making drawings directly on the monitor screen.

We can store pictures, photographs, diagrams into the computer with the help of scanner. The scanner reads the image and saves it in the computer as a file.

Touchscreen
Touchscreen is a special computer screen that takes the input by sensing the touch of a human finger, gloved hand, stylus, pen or any other pointing device. The user gives instructions to the computer just by touching the screen.

This is an input device which is used to record sound or voice into the computer system. You can store voice data in the computer by speaking in front of this device.

A trackball is similar to a mouse but is mounted in a fixed position. The user spins the ball with fingers to move the pointer on the screen.
A Trackball technology was used in earlier laptop computer which is now replaced with track-pad.

Think and Answer
Name any two input devices you commonly use while working on computer.

Output Devices
The devices which are used to display the results or information are called Output Devices. You can view the output on the monitor or you can print it on a paper using a printer. Monitor and the printer are the commonly used output devices.

Monitor
This is the most common output device connected with the computer to display the processed information. It looks like a TV and is also know as VDU(Visual Display Unit). Pictures are displayed by using a large number of very small dots on screen called pixels. The number of pixels that a monitor can show on its screen is referred to as the resolution of the screen.

Add to Your knowledge
LCD uses very small amount of electricity as compound to CRT.

The output produced on the screen is called Soft Copy Output because it cannot be retained for a long time.

Nowadays LCD monitors are more popular as their sharp picture quality. They are light weighted and flat screen monitors.

Printer
This is an important output device of the computer system. It gives a printed output of the results that appears on the monitor screen. Printed output is also called Hard Copy output because unlike monitor, this output can be preserved even if the computer is switched off.

Think and Answer
What kind of printer do you use in your school?

Printers are of different types. On the basis of their printing techniques, printers are grouped as follows:
1.Character printer
2.Line printer
3.Page printer

Dot Matrix Printer
This type of printer works like a typewriter. It creates an impression on the paper by pressing the end of pins fixed in its print heads, against an inked ribbon. This printer is noisy with a low print quality. Its speed is measured in CPS(Characters Per Second).

Line Printer
This is high speed printer that prints one line at a time. It is used when large quantity of output is required as it produces the quick output. Examples of a Line printer are Drum printer and the Chain printer. The noise level of these printers is high and speed ranges from 200 to 2000 LPM(Lines Per Minute).

Page Printer
Page Printer prints a whole page at a time. Examples of these printers are inkjet printer or a Line printer because it has to store each page in memory before printing it.

Inkjet Printer
This type of printer prints by spraying tiny ink droplets on the paper. It can print in both, color as well as black and white. The print quality of this printer is better than that of Dot Matrix Printer and it prints without making any noise. Its speed is measured in PPM(Pages Per Minute).

Add to your knowledge
The most commonly used printers are:Dot matrix,inkjet and Laser printers.

Laser printer
In this type of printer, laser beam technology is used to print the text or graphics on the paper. The speed of this printer is very fast and it gives out very fine quality prints. It’s speed is also measured in PPM.

Speakers are categorised as output devices. These are used to listen to the music and sounds played by the computer. Normally they come in a pair and have different shapes and sizes.

We can get the print of a photograph, drawing, image stored in the computer, by using a plotter. It is an output device which provides a high quality of printed output. It is generally used by engineers and architects.

Teacher’s Guide
Take the students to the computer lab and show them the various input,output devices available there Demonstrate their working, especially the printers of different types.