A computer system consists of hardware, the electronic devices capable of computing and manipulating information, and software that carries out predefined instructions to complete a given task. The combination of physical equipment (hardware) and logical instructions (software) gives power and versatility to the modern computing systems.

Software is a collection of computer programs and related data that provide the instruction for telling a computer what to do and how to do it. A software is an interface between user and computer. It is a set of instructions, programs that are used to give command to hardware. It is responsible for controlling, integrating and managing the hardware components of a computer system and for accomplishing specific tasks.

Software can be divided into two major categories. 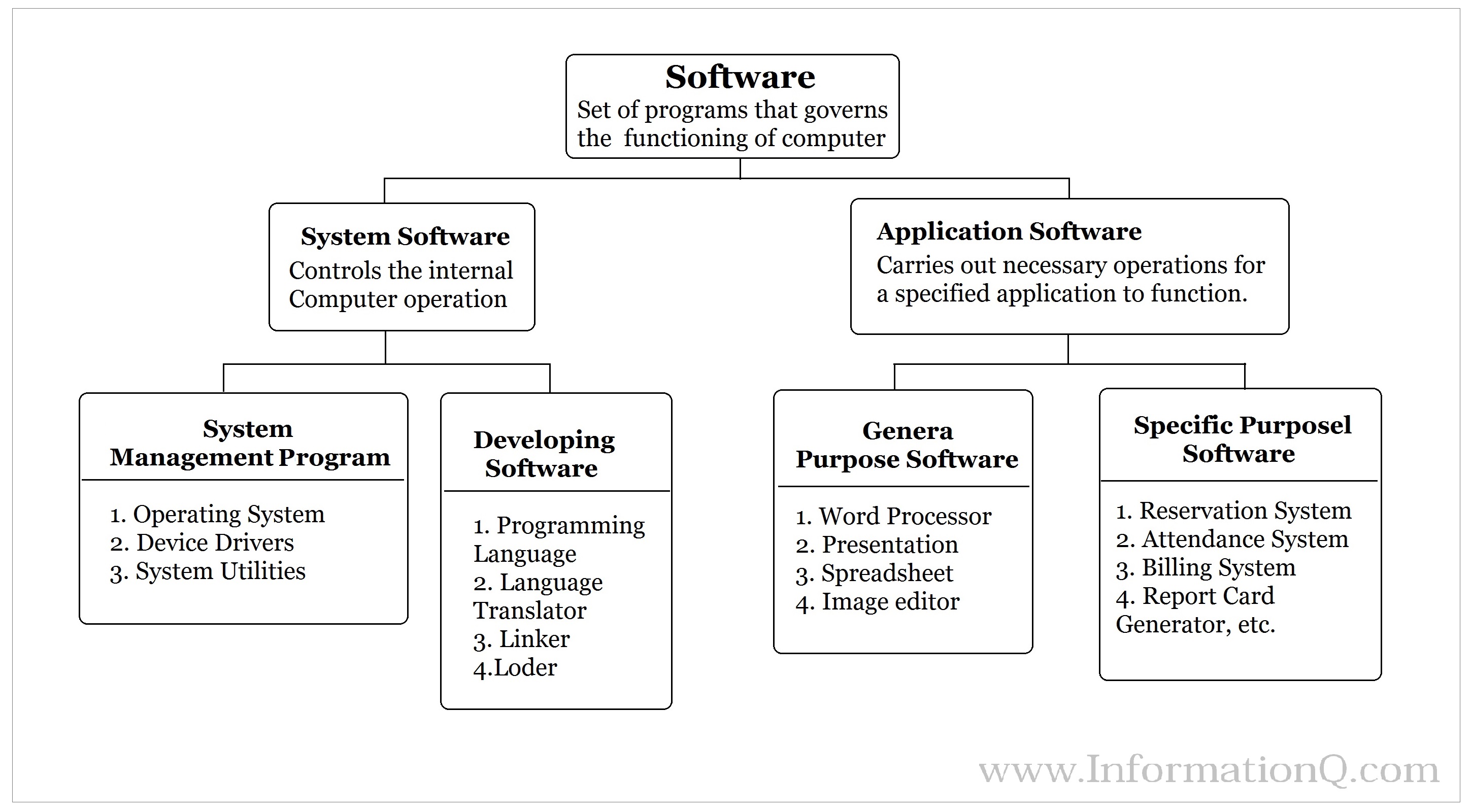 System software consists of several programs, which are directly responsible for controlling, integrating and managing the individual hardware components of a computer system.

It also provides the interface between the user and component of the computer.

The purpose of system software is to insulate the applications programmer as much as possible from the detail of the particular complex computer being used.

Depending on the functionality, the system software can be further divided into two major categories; system management program and developing software.

It includes an integrated system of programs, which manages the operations of the processor, controls input/output, manages storage resources and provides  various support services. Some common examples of system management programs are operating system, device driver and system utilities.

It  consists of programs , which controls, which controls, coordinates and supervises the activities of the various components of a computer system. Its function is to provide link between the computer hardware and the user.

The Basic Input / Output system (BIOS) is commonly known as System Bios. The BIOS controls various electronic components within the main computer system The  initial function of the BIOS is to initialize system devices such as the RAM, hard disk, CD/DVD drive, video display card and other hardwares. The BIOS sets the machine hardware into a known state that helps the operating system to configure the hardware components. This process is known as Booting Up.

A software, which is written with the objective of making a device functional when it is  connected to the computer is called device driver. It is a system software that acts like an interface between the device and the user. Every device, whether it is a printer, monitor, mouse or keyboard has a driver program associated with it for its proper functioning.

Each language has its own syntax i.e., the set of specific rules and expresses the logical  steps of an algorithm . programming languages are divided into two categories; Low  Level Language (LLL) and High Level Language (HLL).

It  serves as the bridge between raw hardware and programming layer of a computer system. It is designed to improve the translated code before it is executed by the processor.

Some High Level Languages and Their Application Areas

A linker is a system program that links together several object modules and libraries to form a single and coherent program (executable). The main purpose of linker is to resolve references among files. Linker is used to determine the memory locations that code from each module will occupy and relates its instruction by adjusting absolute references.

Loader is a kind of system software, which is responsible for loading and relocation of the executable program in the main memory. It is a part of operating system that brings an executable file residing on disk into memory and starts its execution process.

There are two types of application software.

A word processor is a software program capable of creating, storing and printing of documents. Word processors have the ability to create a document and make changes anywhere in the document. This document can also be saved for modification later on or be opened on any other computer using the same word processor.

Today, the word processor is one of the most frequently used programs or online  services used on a computer system. E.g., Microsoft Word , WordPerfect (Windows only), Appleworks (Mac only), Open Office. Org etc.

Presentation is the practice of showing and explaining the contents of a topic  to an audience or learner visually. People , in a variety of settings and situations, use presentation software to make their presentations more interesting and professional. e.g., marketing managers use presentation graphics to present new marketing strategies to their superiors Sales people use this software to demonstrate products and encourage customers to make purchases. Students use it to create high quality class presentations. e.g., Microsoft PowerPoint, Corel presentations, Lotus Freelance Graphics etc.

Spreadsheet applications (sometimes referred to simply as spreadsheets) are the computer programs that accepts data in a tabular form and allow you to create and manipulate  spreadsheets electronically. In Spreadsheet Applications, each value exists  in a cell. You can define what type of data is in each cell and how different cells depend on one another. The relationships between cells are called Formulas and the names of the cells are called Labels. E.g., Microsoft Excel, Corel Quattro Pro, Lotus 1-2-3 etc.

A DBMS (Database Management System) refers to the software that is responsible for sorting, maintaining and utilizing a database. It  enables a user to define, create and maintain the database and provide controlled  access on it. A database is a collection of integrated data stored together to serve multiple applications.

(b)    Elimination of data inconsistency

Desktop publishing software is a tool for graphic designers and non-designers to create visual communications for professional or desktop printing as well as for online or on screen electronic publishing.

Graphics Software or image editing software is an application program or collection of programs that enables a person to manipulate visual images on a computer system. Most graphics software have the ability to import  and export one or more graphics file formats. Typical graphics software enables data to be plotted as line chart, bar chart and pie chart. e.g., Adobe Photoshop, Pizza, Microsoft Publishes etc.

Multimedia includes a combination of text, audio, still images, animation, video or interactivity content forms. The term is used in contrast to media which uses only rudimentary computer display such as text only or traditional forms  of printed or hand produced material.

Specific purpose software are designed to perform specific tasks. This type of application software generally has one purpose to execute.

Some of the specific purpose application software’s  are described below.

It is an attempt to balance inventory needs and requirement to minimize total cost, resulting from obtaining and holding an inventory. Inventory is a list of goods and materials available  in a stock. Inventory management system  is generally used in departmental stores or in an organisation to keep the records of the stock of all the physical resources.

Modern inventory management systems must have the ability to track sales and  available inventory, communicate with suppliers in near real-time, receive and incorporate other data, such as sessional demand.

Payroll management system is used by all modern organisations to encompass every employee of the organisation who receives a regular wage or other compensation. All different payment methods are calculated by the payroll software and the appropriate Pay checks are issued.

A reservation system or central reservation system (CRS) is a computerized system used to store and retrieve information and conduct transactions related to air travel, hotels, car rental, or other activities. It is an application software which is commonly seen at railway reservation offices, this software helps the concerned department to automatically check the availability of the seats or berths of any train and any particular data with incomparable speed.

It is an application software which is commonly used in schools by the examination department  to prepare and generate the report cards of the students. It performs all possible mathematical calculations and checks whether a student can be promoted to the next class or not. It can also be used to calculate the class wise  ranking of a student.

Accounting software is an application software that records and processes accounting transactions within functional modules such as accounts payable, accounts receivable, payroll and trial balance. It works as an accounting information system.

There are several types of accounting software’s as follows

It refers to the systems and processes at the intersection between human resource management (HRM) and information technology. The function of HR department is generally administrative and common to all organisations. e.g., Effective Staff, Cezanne HR etc.

Attendance system is an application software designed to track and optimize the presence of a person/ student in an organisation or school. Now-a-days, attendance system can be integrated with customer’s existing time/attendance recording devices like Biometrics/ Access cards. Attendance management can be done in two ways

It refers to the software that is used to perform the billing process. It handles the tracking of ladled products and services delivered to a customer or set of customers. e.g., Billing Tracker, Killing etc.