Memory is major part of computers that categories into several types. Memory is best storage part to the computer users to save information, programs and etc, The computer memory offer several kinds of storage media some of them can store data temporarily and some them can store permanently. Memory consists of instructions and the data saved into computer through Central Processing Unit (CPU). 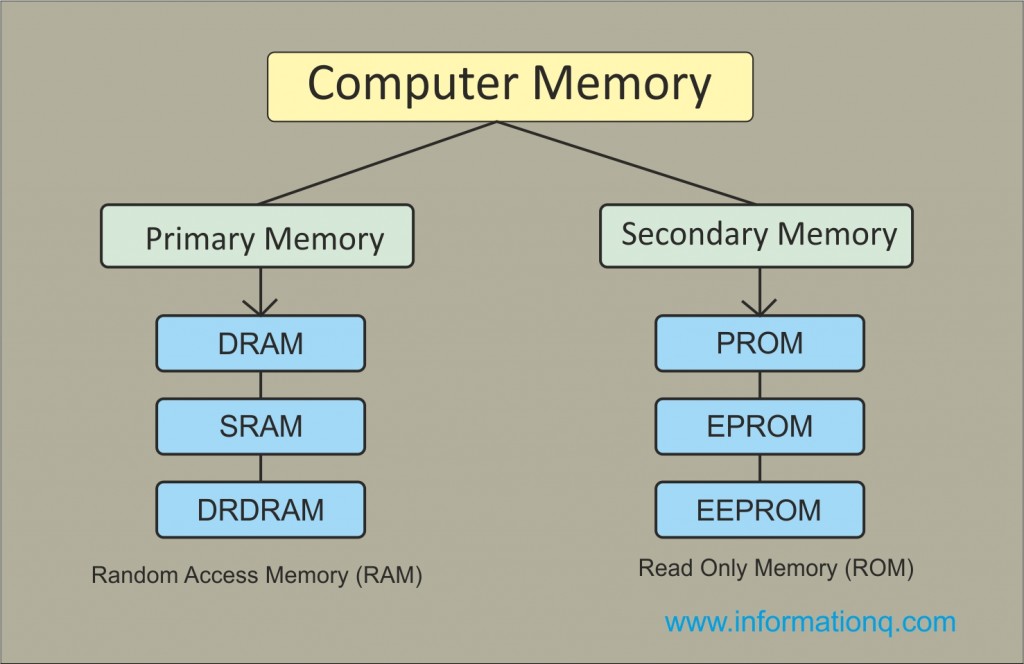 Memory is the best essential element of a computer because computer can’t perform simple tasks. The performance of computer mainly based on memory and CPU. Memory is internal storage media of computer that has several names such as majorly categorized into two types, Main memory and Secondary memory.

Primary Memory also called as volatile memory because the memory can’t store the data permanently. Primary memory select any part of memory when user want to save the data in memory but that may not be store permanently on that location. It also has another name i.e. RAM.

The primary storage is referred to as random access memory (RAM) due to the random selection of memory locations. It performs both read and write operations on memory. If power failures happened in systems during memory access then you will lose your data permanently. So, RAM is volatile memory. RAM categorized into following types.

Secondary memory is external and permanent memory that is useful to store the external storage media such as floppy disk, magnetic disks, magnetic tapes and etc cache devices. Secondary memory deals with following types of components.

ROM is permanent memory location that offer huge types of standards to save data. But it work with read only operation. No data lose happen whenever power failure occur during the ROM memory work in computers.

ROM memory has several models such names are following.

1. PROM: Programmable Read Only Memory (PROM) maintains large storage media but can’t offer the erase features in ROM. This type of RO maintains PROM chips to write data once and read many. The programs or instructions designed in PROM can’t be erased by other programs.

2. EPROM : Erasable Programmable Read Only Memory designed for recover the problems of PROM and ROM. Users can delete the data of EPROM thorough pass on ultraviolet light and it erases chip is reprogrammed.

3. EEPROM: Electrically Erasable Programmable Read Only Memory similar to the EPROM but it uses electrical beam for erase the data of ROM.